Gee, I thought I might spend the rest of my life in Millenocket, ME, mulling about in the attic of the old lodge.  It is all things beautiful and quaint and ghostly. 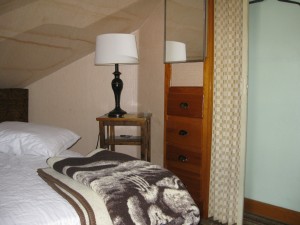 The building was originally built as a lodge in 1901

There are all of these little rooms and lots of crawl space!  The spaces are opened and closed by little doors!  This is the creepiest thing for me.  I come from a place where “crawl space” doesn’t exist within the house.  I didn’t have an attic or a basement, so I’m fascinated by them.  Most of the rooms are unoccupied, but kept perfectly clean and orderly.  There were a few old beer bottles left in the creepy, dark crawl space though.  Hmm…I wonder how many rooms there are in this lodge.  …There must be at least twenty.  (See the pic of the red house in yesterday’s post).

And people have been comin through! First there was Atom and Magic Stick, two older guys whom I thought were gay, but talked about their wives and kids.  Guess that doesn’t necessarily mean they’re not gay though.  Whatever.  They were really nice and offered me lots of tips.  Rosemary was in the lodge for a day.  Last night spent watching the world cup (NED/URU) with Nolan and Skippy.  Today I watched the game (ESP/GER) with a girl called Schlep.  The trail names are a funny thing.  It’s said that you either pick one or the people you travel with for a time will give you one.  I came here already telling everyone my name is Andrea, but only because Hope Kitts didn’t show up for the reservations she made a few days earlier.  So irresponsible.  (haha).  But I’m not going to stick with “Andrea”.  It feels weird for people to call me by it and they don’t seem to remember my name the first time, like usual.  I feel unusually normal.  But my pseudonomyous existance is understood by many on this path.

I’ve been in this town for five days now and my view of it has changed at least that many times.  The best part so far has been meeting different people for short periods of time and connecting over various things: Soccer, hiking stories and trivial pursuit.  But I’m glad to be moving on.  Wait, let me put that in caps.  BUT I’M GLAD TO BE MOVING ON! 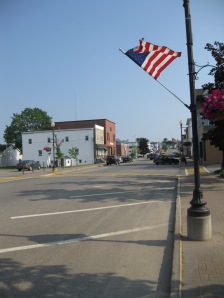 Did I mention I’ve been here for five days?  Well, thanks to The Ra the booties arrived!

I’ve documented the opening of said booties for your viewing pleasure.

Okay, so now to get the darn heck outta Millinocket.  Tomorrow starts at 6:30 a.m.  when I get a ride–with about five other people–to the start of the trail and hike Mt. Katahdin.  It is about ten miles with a 5,000 ft incline packed into four miles.  Other hikers’ pictures show steep, rocky ascents.  The 50 (or so) pound pack gets left at the ranger’s station at the bottom because the trail itself actually continues south.  I hope it is not too hot and humid out.  It should be true camping from there until who-knows-when.  More stories to come.  Stay tuned (subscribe!).

This entry was posted on July 7, 2010, 5:31 pm and is filed under Appalachian, Uncategorized. You can follow any responses to this entry through RSS 2.0. You can leave a response, or trackback from your own site.