So, I’m having a bit of writer’s block.  This post probably won’t be the poetic, literary piece I want it to be; although I’m planning on telling you about a very interesting person named “Insane Duane”, pending photos.  I think by this point my mind is no longer rambling to itself inside it’s dark cave, now it mostly just sings songs.  I’ve gotten used to waking up with the sun and just walking until the sun nearly disappears.  That’s my job right now: walking.  I am a walker–Walker New Mexican Stranger, you might say.  I thought this could be a clever trail name, but it is much too long.

People ask me my trail name before my real name.  Of course, they are one and the same, but this is unusual and many people do not approve.  I’ve met people self-named Doozy, Moonpie, Long-shanks, Ringleader, Big-Pace, Roadrunner and Google, just to name a few.  I say, “Hello, magical rainbow poop-stain, I’m Hope.”  And they say, “What a nice trail name.”  Actually, I always have to explain that it’s my real name, but since it’s kind of “traily” I’m sticking with it.  Then I say I am myself and feel very philosophical, but probably just come across as patronizing.

Anyway, so I’m not in Maine anymore.  We crossed the state line about a week ago.  Here is a (bad) pic:

Luckily there was a group of girl scouts at the state line to take our pic! Mable-the-dog is not included.

Maine and New Hampshire are beautiful!!!  I have to say, I’m going to miss the incredible views at the tops of some of these mountains.  The White Mountains extend through Maine and New Hampshire.  Mt. Washington is the tallest of the peaks at 6,288 ft.  It is so popular that there is a road and even an old cog train that goes up to the top! It was strange to climb that big mountain and then see a bunch of overweight, pale tourists crowding around the summit sign only to drive back down an hour later.  But that’s just me being arrogant.

At the top of Mt. Washington throwing my alien gang sign, which is probably a real gang sign I am unaware of. 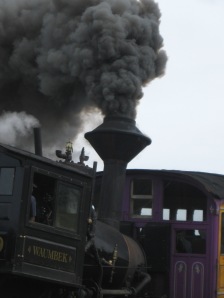 Why we don't have cog trains anymore 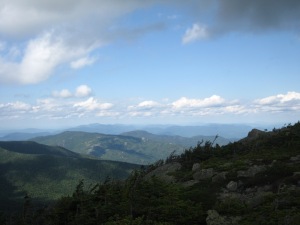 Hiking in the White Mountains of New Hampshire has been a totally different experience, mainly because of the huts.  There are a string of huts built by the Appalachian Mountain Club that cater to families and people visiting the White Mountains for a few days.  They are small bunkhouses with a kitchen, dining room and bunk rooms.  They range from $80–$120 per night, but us lowly thru-hikers aren’t expected to pay that kind of money–thank God!  We can do work-for-stay!   I worked in five huts along the way.  Typically a hut won’t accept work-for-stay if you arrive before 4 and/or if there are more than 2 thru-hikers already accepted.  If you are turned away you are sent to a different campsite a mile or more away at which you have to pay a fee.  It’s difficult to “stealth camp” because most of the trail is above tree-line, which means it’s rocky and windy and without water; some people mangage to do it anyway though.  Luckily, I timed my hikes so that I would arrive at the right hour and also practiced my desperate please-take-me-in-I’m-a-poor-girly-hiker look.  It was a great experience, not only because I got to eat as much food as I wanted and sleep on the dining room table, but the kids who worked at the huts were really great too.   Here are a few pictures of us at Carter Notch hut doing something called “shake-face”.  As it implies, you shake your face so that it gets all loose and take a picture.  Some of us are better at it than others.  🙂 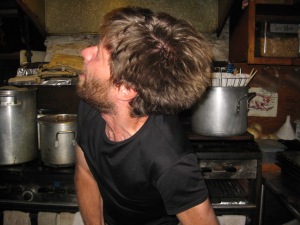 Tanner (aka Ebeneezer) preparing for shake-face 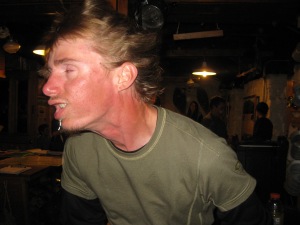 Lauren (aka Wren) is a little too proper for shake face. Look at that hand! 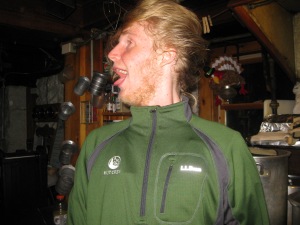 I'm sorry, I thought this was a Pantene ProV shoot.

Carter and Madison were my two favorite huts.  I wonder if I will ever see any of these people again.

The Northbounders tell me that after the White Mountains the trail is a boring green tunnel.  I wonder if it’s true.  I think I will enjoy going into the towns.  I just hope I have enough time! It’s already almost September and I’m still in New Hampshire.  But the saying goes that I’ve done 20% of the trail and 80% of the work.  So, naturally I’ll be able to go more miles each day and hopefully make it to Georgia by the early part of December.  Oh no! I’m getting kicked off the library computer and I didn’t practice my please-let-me-stay-on-a-little-bit-longer face.  Gotta run!  A few more pics while I still can: 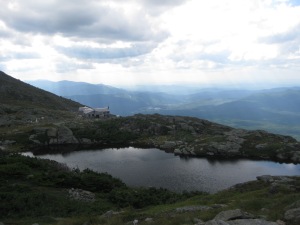 Lakes of the Clouds hut, below the summit of Mt. Washington 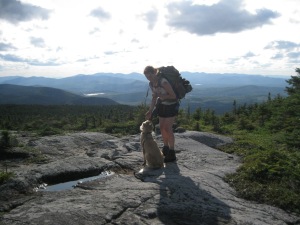 Me and Mable-the-Dog on the top of a mountain in Maine. I love this dog.

Mt. Washington from two days away 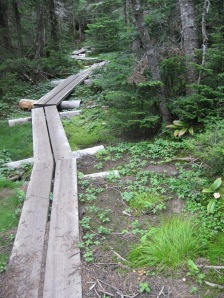 Bog Bridge! My very favorite thing on the trail.

Spiderweb withstanding the wind and the rain.

A portion of the Presidential Range 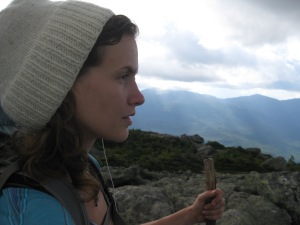 This entry was posted on August 21, 2010, 1:37 pm and is filed under Appalachian, Uncategorized. You can follow any responses to this entry through RSS 2.0. You can leave a response, or trackback from your own site.